S was severely handicapped, a child of 2 years and 4 months old… 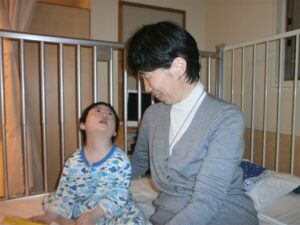 When I met his mother for the first time on an Open Garden Day of our nursery school, I felt some kind of distance in her though she was very polite. She didn’t talk to anybody, withdrawn into herself. As director, I advised her to apply for admission to our nursery school on behalf of her son. With the very positive response of her husband, even though she was a bit reluctant, they decided to send S to us.  It was not long before his epilepsy was discovered and his epileptic seizures were getting worse and more frequent.  He started to wear a special headset to keep him from injury in case of fall. The children accepted him well without any resistance.

In the second year, Mother asked me to teach her catechism. Though baptized with the child, she hardly knew about faith. Our catechism class once a week always started with her questions about life such as ‘why the merciful God allowed so many sorrows in our lives,’ and many other things like that. She expressed her anger against all kinds of contradictions of life. She even wrote me a letter, saying that she felt as if someone was telling her to live to do penance. I was shocked by what she wrote. She said to me, “I met your sisters many times around here but nobody helped me.” I realized that the Gospel message hadn’t reached her, even though I was living near her.

Since then, I tried to be open and share my time with her as much as possible. I wanted to let her know that she is loved by God dearly as a person. I called her by her name, not S’ mother.  I wanted to walk alongside her who had such a pain within herself and in her family.

It was S’s final year in the nursing school.  The accident happened on Passion Monday.  Mother called me up in the middle of the night. S was nearly drowned in a bathtub and was rushed to the hospital in an ambulance. Early the next morning I hurried to the hospital but I was not allowed to see him in the ICU. He was in a very critical condition. Mother was lost in a state of shock and anxiety. I stayed with her for a few days because I was afraid that she might commit suicide. She was so upset.

The child was able to come out of danger and recovered slowly. But the hospitalization was prolonged because the hospital had reported the case to a children’s welfare center suspecting child abuse. They wouldn’t allow the parents to take him home in spite of their claim of their innocence and that it was an accident.

The staff from the center visited their home to investigate how it happened. Such interrogation gave her another blow. Being a social worker, I talked to the staff and promised to conduct visits once a week to accompany them as they seek to better care for S so that an accident like this would never be repeated. A few days later S was discharged from the hospital and was welcomed home by his parents in great their relief and joy.

In November 2019, Pope Francis came to visit Japan.  S was then a 2nd grader of the primary school. He and his parents attended the Papal Mass at the Tokyo Dome, which was packed with 50,000 people. Just before the Mass, the Pope went around the stadium in a mobile, giving blessings to the cheering audience. Mother hardly expected to have him blessed, being in the middle of such a big crowd, but a woman nearby called out in a loud voice, “Holy Father, here, here, this child is sick. Please bless him.” She screamed again and again. It was a miracle. Pope Francis got off the mobile and came closer to them. He blessed S who was sleeping in his mother’s arms and kissed him on the forehead.  What a surprise and what a joy!  God’s gift was so great that she has been living in gratitude since then. Her life and its burden is ever the same as before but she has been changed.

Someone is in need. That is the motive of Jesus’ mission. Direct relationship demands a lot, requires discretion and gives me a lot of responsibility. But I am so certain that once I accept all these, the Lord shows that His love overcomes everything.

What is your desire or aspiration for the new Website? 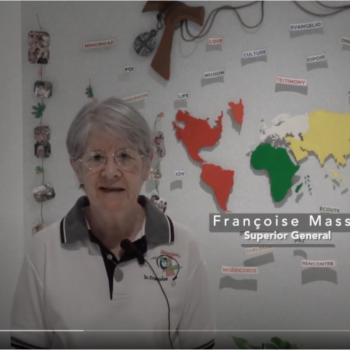 Repentance : the Path of Transformation towards the Future 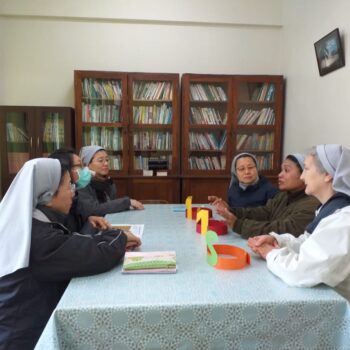